← more from
Haggis Records
Get fresh music recommendations delivered to your inbox every Friday.
We've updated our Terms of Use. You can review the changes here.

Return Of The Haggis EP

by The Haggis Horns 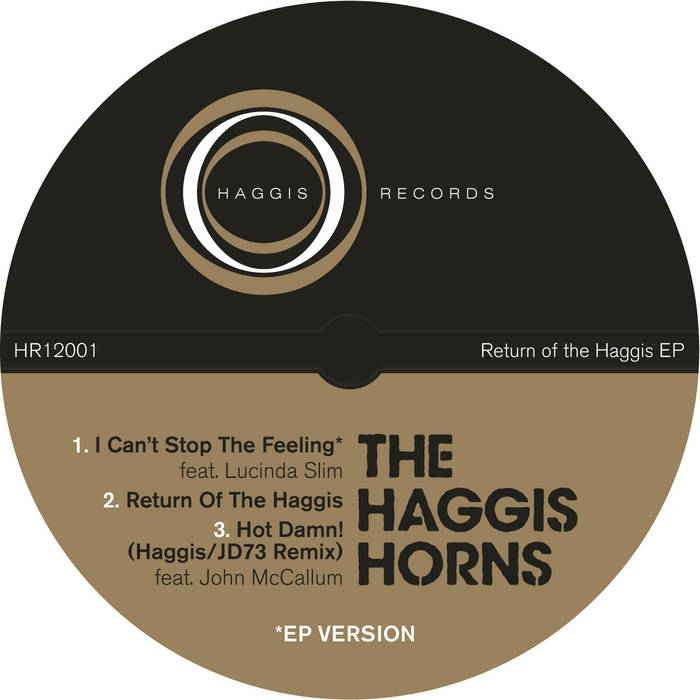 Sam Tweaks Lucinda Slim delivers another stand out vocal performance with such tight brass that you have to move. Favorite track: I Can't Stop The Feeling (feat Lucinda Slim) - EP version.

Rich Albiston Pre-ordered the vinyl, love the sound of Enter The Haggis - reminded me a bit of Funky Stuff at the start. Quality stuff, can't wait to be spinning it soon

We're releasing our long awaited third album "What Comes To Mind" later in the year but first here's a three track Vinyl/Digital EP to wet your appetite!

Check out a taster here of the other EP tracks -
soundcloud.com/the-haggis-horns/return-of-the-haggis-ep-taster

Here's some info about the band and the new EP:

Leeds based The Haggis Horns first hit the music scene in 1999 as both a band and a horn section, the Horns making their first recorded appearance on The New Mastersounds debut album that year. Featuring some of the finest brass and rhythm section players in the UK, The Haggis Horns musicians have played live and recorded with a host of music music artists including Mark Ronson, Jamiroquai, John Legend & the Roots, Amy Winehouse, Corinne Bailey Rae, Lou Donaldson, Martha Reeves, The Cinematic Orchestra, Morcheeba, Roots Manuva, Finley Quaye, Lily Allen and Nightmares On Wax.

Now in autumn 2015, their third album "What Comes To Mind" is getting a release on their own Haggis Records label. As a little teaser they're putting out an EP for summer featuring two new tracks from the album plus a previously unreleased remix of a Haggis Horns classic. On the A-side is "I can't Stop The Feeling" and features singer Lucinda Slim, who featured on the band's second album and gigs regularly with the band. The B-side is "Return Of The Haggis", a typical party funk instrumental the band are known for, a favourite in their live shows and features special guest percussionist Snowboy. Both tracks enlist the bass playing skills of Pete Shand of The New Mastersounds and have that classic mid-70's feelgood funk-soul-boogie vibe reminiscent of early Kool & The Gang, The Blackbyrds and The Average White Band. The final track on the EP is a
previously unreleased remix of their first single "Hot Damn!". Once again featuring the powerful vocals of singer John McCallum, this version adds some boogie/disco spice to the original's hard funk flavour.

Simon Allen (The New Mastersounds) - This new Haggis Horns EP channels the uplifting disco-funk of Jamiroquai, Donald Bird, Roy Ayers, and The Average White Band. Listening in the sunshine will put a spring in your step, a glide in your stride and a smile on your face.

Snowboy - "World-class Funk from the real McCoy. Every track a future classic, and it's been an honour to contribute"

The Haggis Horns have been at the forefront of the UK funk scene for the last 15 years rocking crowds the world over with their distinctive northern funk sound combining break-beats, afrobeat, soul and hip-hop.
They have worked with Jamiroquai, John Legend & The Roots, Amy Winehouse, Corinne Bailey Rae, Take That, Mark Ronson, Martha Reeves, Roots Manuva, Lou Donaldson, Nightmares On Wax & more! ... more

Bandcamp Daily  your guide to the world of Bandcamp

Kyle McNeill joins the show to talk about his new project, Phantom Spell